This report presents the results of a bibliometric study of peer reviewed publications fully or partially funded by the Health Research Board (HRB). The bibliometric analysis for this study was commissioned from CWTS Leiden, a world-leader in this area.

The results of that analysis were compared, where possible, to a previous Bibliometric study undertaken by the HRB in 2014, which looked at HRB publications from 2000-2012. HRB-supported publications between 2013 and 2016 were matched to the Web of Science database and were linked to a number of units of analysis. The benchmark units chosen by CWTS Leiden reflected ether similar size (HRC New Zealand) or similar focus (MRC UK and NIHR UK), and HRB publication output was also compared to the publication output of Ireland as a whole. In addition publications were matched by the HRB to Grant types (Projects & Programmes, Infrastructure & Networks, Capacity Building & Leadership, and Co-funded Awards) and HRB Strategic Pillars (Basic Biomedical, Applied Biomedical, Clinical, Population Health and Health Services Research). The internal coverage, which is an estimate of the importance of Web of Science indexed publications for researchers, was above 75% for all units of analysis (average 90.4%.) This indicates that only a small share of the publication output by these units was excluded from this bibliometric analysis. For the citation impact analysis, only publications published in 2013 and 2014 have been taken into account (citations included until 2015). 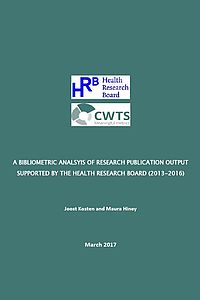