A new report from the Health Research Board (HRB) presents findings from the National Drug and Alcohol Survey (NDAS) 2019–20, which shows that more people are using illegal stimulants, smoking less, and binge drinking remains high. 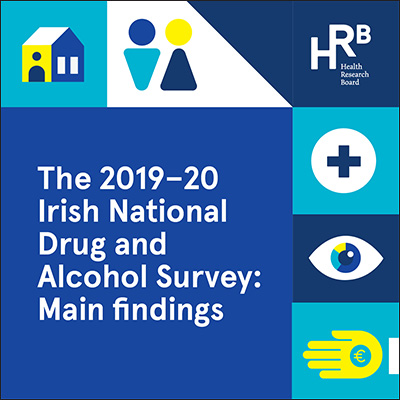 The household* survey interviewed 5,762 people in Ireland aged 15 and over, to look at what drugs people are using and how often, people’s perceptions and attitudes towards drugs, and the impact of drugs on local communities. It is the first time the HRB has conducted the survey, and the fifth survey that has been undertaken since 2002–03.

Commenting on the findings, Dr Deirdre Mongan, Research Officer at the Health Research Board and lead author of the report, says:

“While there has been little change since the last survey in the number of people using drugs overall, what is notable is the rise in the use of illegal stimulants, particularly cocaine and amphetamines, as well as an increase in the use of LSD and poppers. Also, people who use drugs are now more likely than before to use a wider range of drugs. By monitoring trends over time, the Health Research Board can provide solid evidence in relation to changing drug use patterns. This supports the development of targeted approaches to create awareness about the prevailing challenges of drug use, to help reduce harm and inform policy change in relation to drug use.”

More detail on the trends observed in the survey are summarised below.

Almost one-in-four (23%) respondents have used an illegal drug at some point in their lifetime, equating to almost 900,000 adults aged 15 years and older in the general population, and one-in-fourteen (7%) reported use of an illegal drug in the last year.

Results show that illegal drug use in Ireland has plateaued since 2014–15; with notable changes reported in the types of drugs used and who uses them. There has been a significant rise in the use of stimulants (cocaine, ecstasy, amphetamines) and in the use of LSD and poppers, with a small decrease reported in cannabis use. One-in-four of those who used drugs of all types reported last year use of at least three different drugs in 2019-20 (25.0%) compared to 2014–15 (15%).

Use of alcohol with other drugs

The survey reports that alcohol is the substance most commonly used with ecstasy, cannabis and notably, cocaine – with more than nine out of ten people who used cocaine in the last year also using alcohol at the same time. 85% of respondents who had ever used cocaine consumed alcohol on their first occasion of cocaine use.

“Mixing drugs or polydrug use, particularly alcohol and cocaine, is a real concern because it can result in greater physical harm. It is important that we continue to monitor trends to inform public health decision-making.” - Dr Mongan

Attitudes around use of cannabis

More than one-third (37%) of respondents reported a ‘very big’ or ‘fairly big’ problem with people using or dealing drugs in their local area, this ranged from 44% in the most deprived areas compared to 20% in the least deprived areas. Commonly reported problems included drugs being too easily available, people dealing drugs, and children and teenagers taking drugs.

One-in-ten respondents (the equivalent of 390,000 people in the general population) aged 15 years and older have had either personal experience of drug-related intimidation or knew someone who had been intimidated, with numbers peaking among communities in the Dublin area. Those in deprived communities were twice as likely to experience drug-related intimidation than residents in less deprived neighbourhoods.

Speaking about the social impact of drug use, Dr Mongan highlights:

“While there are almost equal numbers of people reporting drug use in less deprived areas as there are in deprived communities, the survey data reinforces the well-documented connection between the negative consequences of drug use and social disadvantage, and quantifies the very real, human toll of drug-related intimidation for those living in these communities.”

On average, nine out of ten people who use cocaine, ecstasy and cannabis are confident that it would be ‘very easy’ or ‘fairly easy’ to access their drug of choice within a 24-hour period.

Alcohol use in Ireland

Rates of hazardous and harmful drinking remain high. Two-in-five drinkers engage in heavy monthly episodic drinking (binge drinking) and one-in-five drinkers meet the criteria for Alcohol Use Disorder. Hazardous and harmful drinking patterns are most common among 15-24-year-olds, with 56% engaging in monthly binge drinking and 38% meeting the criteria for Alcohol Use Disorder.

Alcohol-related harm is most common among those with problematic drinking patterns. Those with Alcohol Use Disorder are thirteen times more likely than low-risk drinkers to experience any of the following harms – health issues, being involved in an accident or in a fight, experiencing role impairment, or negative impacts on their home life.

Since the last survey, there has been a notable drop in Cannabis Use Disorder, particularly among men aged 15–34.

Dr Mongan says:“Smoking rates have now decreased by over 40% since 2002–03 when one-third of 15–64-year-olds smoked. There has also been an increase in the average age at which young people start to smoke. These positive changes in smoking are a reflection of government tobacco control policies that have been implemented, including graphic warnings on packaging, restrictions on sale, removal of point-of-sale tobacco displays and excise increases”.

“There has been an increase in the number of people who do not drink, and the age at which young people have their first drink has also risen. This is an encouraging finding, as the younger a person starts drinking, the more likely they are to develop Alcohol Use Disorder in adulthood. Of concern however is the high prevalence of Alcohol Use Disorder among young people who do drink.” - Dr Mongan

Notes to editors:
*NDAS only includes private households and consequently does not allow for people in prison or other institutionalised individuals, homeless individuals, or Travellers to be included, potentially excluding adults who may be more likely to use drugs than the general population.