A new report from the Health Research Board (HRB) presents an overview of alcohol consumption and harm in Ireland, analysing trends and assessing the impact of policy changes over time. 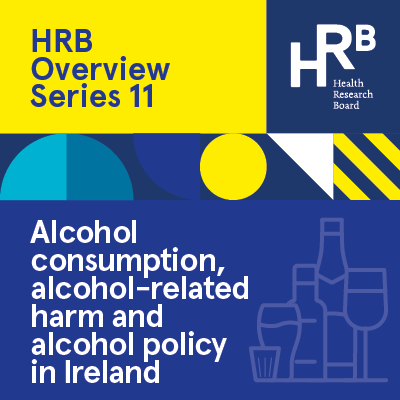 Key findings from the report include:

The HRB has found that while alcohol consumption levels in Ireland have plateaued since 2013, people’s consumption remains significantly higher than the Government’s 2020 target of no more than 9.1 litres of pure alcohol per person a year. In 2019, on average every person in Ireland aged 15 and over drank 10.8 litres of pure alcohol a year – the equivalent of either 40 bottles of vodka, 113 bottles of wine or 436 pints of beer. Given one in four people in Ireland don’t drink at all, actual consumption rates among those who do drink would be much higher than this.

Ireland ranks 9th among OECD countries in terms of alcohol consumption and 8th in the world when it comes to monthly binge drinking, defined as consuming more than six standard drinks in one sitting.

“While we have not seen a rise in consumption in recent years, the amount we drink and in particular how we drink continues to put us at risk of serious harm,” explains Dr Deirdre Mongan, Research Officer at the HRB and co-author of the report.

“Binge drinking is still widespread, especially among young people. Almost one in four men and one in ten women report that over the past year they have drunk more in a single sitting than would be suggested as a maximum weekly limit by low-risk guidelines. However, it appears many of us are unaware that our habits may be harmful: more than half of Irish drinkers are classified as hazardous drinkers, yet 74% consider themselves to be a light or moderate drinker.”

The report provides a number of insights into how consumption patterns vary between age groups and genders. For example:

Changes to alcohol consumption during the COVID-19 pandemic

Dr Mongan comments: “While it is still too early to tell the full impact of the change in drinking habits due to the pandemic, all signs point to substituting drinking in on-trade premises with drinking at home. This is concerning in particular for households with children, as research shows that children exposed to parental drinking at high levels are vulnerable to adverse outcomes.”

The report’s findings underline the significant harm that alcohol continues to have on the health of people living in Ireland. 1,094 alcohol-related deaths were recorded in 2017 – an average of 3 deaths per day. Over 70% of those who died of alcohol-related causes were under 65 years old, highlighting the high levels of premature mortality associated with alcohol.

Figures on hospital discharges (excluding emergency department data) reveal the increased burden placed on the healthcare system due to alcohol-related conditions over the past two decades:

The report states that over 82% of schoolchildren have consumed their first alcoholic drink by age 17, with the proportion of children reporting to have been ‘really drunk’ on at least one occasion ranging from 5% of 13-year-olds to 62% of 17-year-olds. Parents were the most common source of alcohol: 35% of 16-year-olds reported getting alcohol from their parents; 19% at a pub, bar or club; and 14% at supermarket, shop or off-license.

The report also investigates how young people are impacted by the drinking habits of their parents. Almost one-third (32%) of children in Ireland live with at least one parent who is either a regular binge drinker (27%) or dependent on alcohol (5%). One in six carers (16%) reported that children for whom they had parental responsibility experienced harm as a result of someone else’s drinking.

The report includes a number of positive findings. One in four (25%) Irish people report not drinking alcohol at all in the past year, compared with abstinence rates in England and Scotland of 18% and 16% respectively. Moreover, there has been a continuous decrease in the percentage of schoolchildren who drink alcohol or report having been drunk on at least one occasion, in particular among 13-15-year-olds.

“This is an encouraging finding, as this group is particularly vulnerable to experiencing alcohol-related harm,” comments Dr Mongan. “However, it is important to note that we have not seen a similar trend in older age cohorts, with little change apparent in the drinking patterns of 17-year-olds for example.”

In line with the HRB’s role of delivering evidence to inform Irish health policy, the report evaluates recent policy developments in light of the findings presented. The most significant policy change since the publication of the previous report in 2016 is the introduction of the Public Health (Alcohol) Act in 2018. The main provisions in the Act include minimum unit pricing (MUP), structural separation of alcohol products in mixed retail outlets, restrictions around alcohol advertising, and labelling of alcohol products.

“Our findings indicate that for the Alcohol Act to have a real impact, it will be important to implement all measures, including Minimum Unit Pricing,” remarks Dr Mongan. “Irish data shows that the heaviest drinkers buy the cheapest alcohol. Minimum Unit Pricing is designed to target the heaviest drinkers who seek the cheapest prices, which means it can have the greatest effect among those who experience the most harm.”

The report also points to international evidence affirming the capacity of MUP to reduce consumption of alcohol as well as the burden of alcohol-related harm.

“By continuing to monitor developments in alcohol consumption and harm, the HRB can supply valuable data in support of future policy to help reduce harm,” Dr Mongan concludes. “The value of carrying out these reviews over time is that we can evaluate the impact of changes in legislation, supporting evidence-based policy making in this important area.”