The Health Research Board (HRB) has published the Irish results from the European Web Survey on Drugs (EWSD), providing insights into the behaviour of a wide range of people who use drugs. 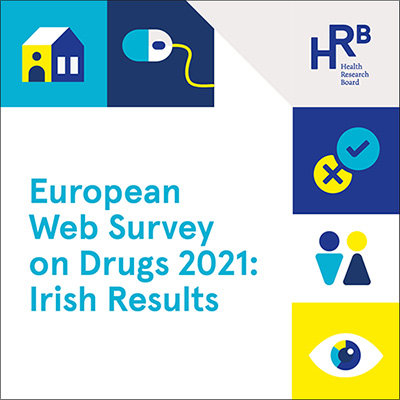 This is the first time Ireland has participated in the EWSD, which aims to better understand the behaviour among people who used drugs in the last year, particularly occasional users and those who use drugs in nightlife settings.

The online survey was undertaken across 30 European countries between March and May 2021. It collected data among people who use drugs, from those who are experimenting or occasional users, to those who use drugs in a more intensive way. The Health Service Executive (HSE) managed the recruitment of the survey sample and 5,762 people in Ireland responded to the survey.

Commenting on the HRB report findings, HRB Chief Executive Mairead O’Driscoll said: “Although we know that young people use drugs in risky ways in nightlife settings, this group is considered ‘hard to reach’ as they would not generally present to addiction services. Survey research like this helps the Health Research Board better understand how these communities are using drugs, so we can deliver valuable evidence to inform policy and prevention strategies to reduce harm and support recovery.”

Commenting on the approach to the survey, Dr Deirdre Mongan, Research Officer at the HRB, says: “In the past, we have typically sourced information on patterns of drug use from general population surveys or from treatment data. But these often miss young people who use drugs in nightlife environments. Tailored recruitment strategies like the ones used in the EWSD can tap into these communities and monitor emerging drug trends across society.”

Dr Eamon Keenan, National Clinical Lead, Addiction Services at the HSE comments: “The HSE will use these findings to improve harm reduction responses on Drugs.ie and across third-level and nightlife settings. We want to continue to learn about current trends and to further explore the closing gender gap between male and female stimulant user groups relative to nightlife spaces. Both the European Web Survey on Drugs and the HRB 2019–20 National Drug and Alcohol Survey indicate relatively high levels of cocaine use among young females which warrants review on their experiences and potential vulnerabilities in nightlife settings.”

It is important to note that this survey is not a general population study and so cannot be taken as representative of the broader public as a whole; rather the aim is to investigate the behaviour of a particular sub-group of the population who identify themselves as drug users.

In addition, results may have been impacted by the fact that when this survey was undertaken, COVID-19 restrictions were in place in Ireland, including the closure of nightlife settings.

Drug types and frequency of use

Among the survey sample of people who have used drugs in the last year, cannabis was the most commonly used drug, followed in order by cocaine, ecstasy, and ketamine. In the last year, 36% of respondents had used one drug, 20% used two different drugs, and 44% used three or more. Among 18–24-year-old respondents, 55% of males and 50% of females had used three or more drugs in the past year.

The survey findings revealed the following insights on the use of specific drugs:

Commenting on these findings, Eamon Keenan says: “The survey has been a useful tool to capture emerging drug trends such as the current popularity of ketamine. These findings support what we are witnessing across festivals this summer, with ketamine appearing as the substance of choice, often used as part of a polysubstance pattern with stimulant drugs MDMA and cocaine.”

Survey respondents were asked about how they purchase the drugs they use. It was found that for cannabis herb, the most common channels were direct contact with source/dealer (86%), through social media (22%), or via the darknet (9%). For cocaine, the breakdown was similar: most commonly users purchased the drug through direct contact with source/dealer (87%), via social media networks (14%) or on the darknet (3%).

When survey respondents were asked about the impact of COVID-19 restrictions on their drug use, results varied depending on the drug in question. Forty-five per cent of cannabis herb users reported increased use, while almost one in three decreased their use. More than one in ten ecstasy users increased use, with just over six in ten using the drug less frequently. And higher use was reported by more than one quarter of cocaine users, with nearly one half reducing their use.

Reflecting on the significance of the overall survey findings, Eamon Keenan concludes: “These findings confirm that our drug landscape has significantly changed and continues to evolve and that we need to adapt our approaches to meet the needs of people who now use drugs in Ireland. The proliferation of stimulant drugs in Ireland is occurring during a period when increased purity and potency of substances is a cause of concern for health services. The current situation is particularly relevant this summer as festivals return. Nightlife outreach and drug analysis are recognised ways in which we can engage with these new user groups identified in this survey.”

*These findings should be viewed in light of the fact that the survey was carried out at a time when COVID-19 restrictions were in place in Ireland, including the closure of nightlife settings.

To receive a copy of the full report, infographics or further information, or to organise interviews with experts, please contact:

The European Monitoring Centre for Drugs and Drug Addiction (EMCDDA) is the leading authority on illicit drugs in the European Union and monitors the drugs situation and responses to drug-related problems in Europe. The HRB manages the commissioning of research and monitoring projects on behalf of the Department of Health and as part of its role as the Irish National Focal Point to the EMCDDA. The EMCDDA coordinated the EWSD across the 30 participant European countries while the organisation of the EWSD in Ireland was a collaborative effort between the HRB and the HSE.