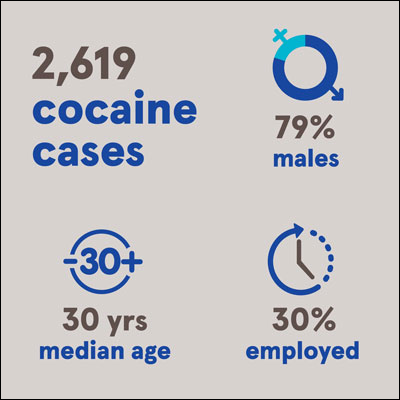 The report, National Drug Treatment Reporting System 2014 – 2020 Drug Treatment Data, describes drug treatment figures over a seven-year period from 2014 to 2020. It shows that opioids remain the most common drug among cases treated for problem drug use. However, the number of cocaine cases continues to increase with cocaine being the primary issue for 1-in-4 cases treated in 2020.

Commenting on the key findings of the report, Dr Anne Marie Carew, Research Officer at the HRB says:

“In 2020 cocaine was the only substance where we saw an increase in numbers entering treatment. This increase must be seen in the context of a 9% drop in the overall numbers entering drug treatment, as a result of temporary service closures and other measures introduced to comply with Covid-19 restrictions.”

“There has been a three-fold increase in the number of cases treated for problem cocaine use since 2014. In 2020, for the first time, cocaine was the most common drug among new cases entering treatment. And for the second year running, cocaine surpassed cannabis as the second most common drug reported among all cases treated for problem drug use.”

There are different types of cocaine. The most common form of cocaine in Ireland is powder cocaine/cocaine hydrochloride (commonly known as ‘coke’). Crack cocaine, though far less common than powder cocaine, is the other main type that we see in Ireland.

“There are notable distinctions between cases reporting problem use of powdered cocaine and cases reporting problem use of crack cocaine. In general, those seeking treatment for powdered cocaine use are male, aged 30, in paid employment and most likely to use alcohol as an additional drug. Crack cocaine cases, however, are more likely to be unemployed and homeless. Monitoring these trends is critical for developing tailored approaches to drug treatment.”

“When we look at gender differences within cocaine treatment, the rate of male cases entering treatment for crack cocaine has remained stable year-on-year. However, the number of women reporting problem use of crack cocaine has increased by almost 80% since 2018.”

For the first time, data on parents in drug treatment are reported. In 2020:

According to Dr Carew:

“This is the first time we have reported data on parents in drug treatment. It is essential that we understand the wider context of the impact of drugs. By monitoring these emerging trends in drug use and treatment in Ireland, the Health Research Board has a pivotal role to inform evidence-based approaches that help reduce harm and support recovery among people seeking treatment for drug use and their families.”

More details on drug treatment figures from the National Drug Treatment Reporting System are shown below. The full report is available on the HRB website. An infographic that outlines key data is also available for download.

** In 2020 we saw an overall drop in the number of cases entering drug treatment for problem use of any drug, which is the result of temporary service closures and measures introduced to comply with Covid-19 restrictions. This does not necessarily indicate a real decline in demand for treatment.

This report describes trends in treated problem drug use in Ireland over the seven-year period 2014 to 2020, as recorded by the National Drug Treatment Reporting System (NDTRS). This information will assist policy makers, service planners and public health practitioners to develop appropriate responses to problem drug use in the future.

Overall findings on drug treatment in 2020