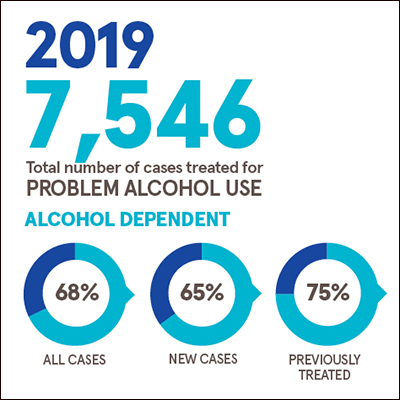 According to Dr Mairead O’ Driscoll, Chief Executive at the HRB,

‘Alcohol continues to be the most common drug that people in Ireland seek treatment for.  The report today highlights high levels of alcohol dependence when people first seek treatment, as well as differences by gender and age. By monitoring addiction treatment trends over time, the Health Research Board provides solid evidence that can help inform more targeted approaches to reduce harm and support recovery among people who need alcohol treatment.’

‘HRB figures show that the majority of cases are already dependent on alcohol when they present to treatment. Seven-in-ten cases are seeking help when their alcohol use is already severe which makes treatment more complex and recovery more difficult.’

‘One-in-five cases in treatment also report problem use of other drugs along with alcohol.  What our data shows is there has been a significant rise in the number of alcohol cases that also report problem cocaine use. This is of particular concern because mixing cocaine and alcohol can result in greater physical harm and more severe side-effects. Over the same period, the number of cases reporting cannabis, benzodiazepines and opioids as additional problem drugs has been declining since 2013.’

A focus on gender

A copy of the HRB Bulletin Alcohol Treatment in Ireland 2013–2019 and related infographic is available in the publications section of our website.

2 Alcohol dependence: Strong desire to consume alcohol, impaired control over use, persistent drinking in spite of harmful consequences, a higher priority given to alcohol than any other activities or obligations, increased tolerance and showing withdrawal reaction when alcohol use is discontinued. Source WHO: The Alcohol Use Disorders Identification Test (2001).

4 What is a standard drink? In Ireland a Standard Drink contains 10 grams of pure alcohol. For example, one Standard Drink is equal to a half pint of normal beer, a small glass of wine (12.5% in volume) or a pub measure of spirits (35mls) https://www2.hse.ie/wellbeing/alcohol/improve-your-health/weekly-low-risk-alcohol-guidelines.html

This paper describes trends in treated problem alcohol use in Ireland over the seven-year period 2013 to 2019, as recorded by the National Drug Treatment Reporting System (NDTRS). This information will assist policy makers, service planners and public health practitioners to develop appropriate responses to problem alcohol use in the future.