The latest drug treatment figures from the Health Research Board (HRB) show a 50% increase in the number of cases presenting for cocaine treatment between 2017 and 2018. 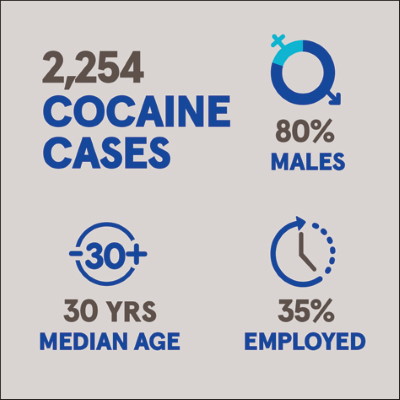 While opiates remain the most common drug reported among cases treated for drugs use (42%), cocaine (22%) is now rivalling cannabis (23%) as the second most common drug that people receive treatment for.

‘The 50% increase in cocaine dominates the figures published today. It represents the majority of the increase in all treatment cases. HRB figures show a consistent rise in treatment for cocaine since 2013 with the biggest increases in 2017 and 2018 and highlights a changing pattern of drug use during the recent economic recovery’.

‘Drug treatment data is an important source of information because it is an indicator of the harms of drug use among the general population.  By providing timely data the HRB can help increase awareness of risk, but also inform decision makers who can make appropriate responses to reduce harm and support recovery based on evidence’.

‘Just over half of the cases treated for problem cocaine use had never been in treatment before.  The fact that people are seeking help is encouraging, particularly because many also used other drugs such as alcohol, cannabis and benzodiazepines and mixing drugs in this way can impact on recovery and increase the risk of overdose.’

The full report is available to download from the HRB website at www.hrb.ie/publications and www.drugsandalcohol.ie/30969. An infographic that outlines key data is also available for download.

For further information, or to organise interviews, please contact:

This paper describes trends in treated problem drug use in Ireland over the seven-year period 2012 to 2018, as recorded by the HRB’s National Drug Treatment Reporting System (NDTRS). This information will assist policy makers, service planners and public health practitioners to develop appropriate responses to problem drug use in the future.
The Health Research Board (HRB) is the lead agency supporting and funding health research in Ireland. We manage four health information systems in the areas of alcohol and drug treatment, drug deaths, disability and mental health, and generate evidence to inform health policy. Our aim is to improve people's health, build health research capacity and underpin developments in health service delivery.