There were 17,000 admissions to Irish psychiatric hospitals and units during 2018 according to the latest figures from the Health Research Board (HRB). This represents an increase of 257 from 2017. Depression, schizophrenia, mania, neurosis and alcoholic disorders account for over two-thirds of all admissions. 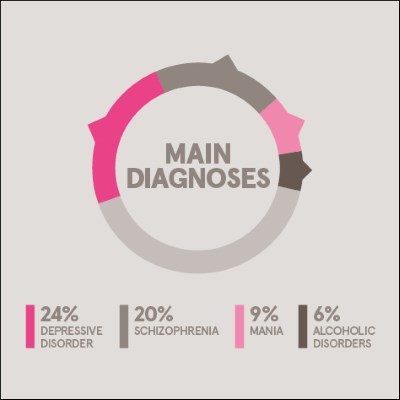 According to Antoinette Daly, Research Officer at the HRB;

‘There has been a slight increase in the number of admissions for under 18s over the ten-year period from 367 in 2009 to 408 in 2018,’ explains Ms Daly. ‘The proportion of under 18 admissions to adult units has dropped from 58% in 2009 to almost 21% in 2018, while admissions to child and adolescent units increased from 42% in 2009 to 79% in 2018. This reflects a change in provision of child services and practice in relation to psychiatric admissions’.

According to Dr Darrin Morrissey, Chief Executive at the HRB;

‘Behind these figures are real people who are experiencing serious mental ill health. The benefit of HRB information systems is that they record data over time, so we can track trends and see them develop. This is useful to inform policy and plan services in line with people’s needs’.

Overview of figures from 2018

Admissions for under 18s

*Including private child and adolescent units

** This included the number of in-patient days used by all admissions in 2018, all discharges in 2018 with an admission date prior to 2018 and all patients resident on 31 December 2018 with an admission date prior to 2018. This yielded the total number of in-patient days used in all approved centres (adult units) in 2018, from January 1 to date of discharge or to the night of December 31 where a patient was not discharged before year-end.

The report is compiled from data supplied by 67 approved psychiatric units and hospitals on the Register of Approved Centres.