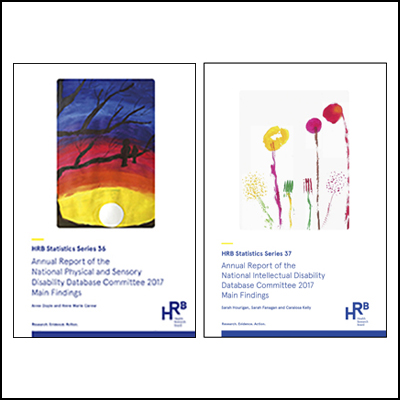 The Health Research Board (HRB) published two reports today (29 June 2018) which analyse the latest data available on services that people with a disability received during 2017, and provide estimates of the type of services they will need up to 2022.

‘There are two key messages from the data in the two reports issued today’, said Ms Caraíosa Kelly, from the HRB.

'Firstly, people with severe intellectual disability are living longer. The majority of those live at home, which is very positive. However, this increased life expectancy, combined with the ageing profile of their primary carers, is going to place demands on our health system to provide specialist care services and supports for both service users and their carers.

And secondly, notwithstanding continuing investment in specialist disability services, there is a recurrent level of unmet need for these services for those with a physical and sensory disability'.

The reports were launched earlier today by Minister of State with special responsibility for Disabilities, Finian Mc Grath, T.D., at a prize-giving ceremony in a Brothers of Charity service in Galway. This event  celebrated the achievements of the two service users who won a competition to design the report covers; Shane Molloy for his piece ‘Poppy Love’ which is on the cover of the NIDD report and Hilary Murray for her design ‘Two Birds at Sunset’ for the cover of the NPSDD report.

‘I would like to congratulate the competition winners for their fantastic artwork on the covers of these reports. Their work truly illustrates the human dimension to these reports which is about improving quality of life for people living with disabilities by understanding the services they require more clearly’.

‘The identification of future demand outlined in these reports will be invaluable to anyone involved in planning services to help plan and to meet the evolving needs for people with intellectual disability’.

Both reports indicate that there are high levels of service requirements in the period 2018-2022.

Print quality photos are also available from the launch.

The Health Research Board (HRB) is the lead agency supporting and funding health research in Ireland. We also manage five health information systems in the areas of alcohol and drug use, disability and mental health and generate evidence for health policy. Our aim is to improve people's health, build health research capacity and underpin developments in service delivery.

The HRB manages two national service-planning databases in relation to people with disabilities: the National Intellectual Disability Database (NIDD), established in 1995, and the National Physical and Sensory Disability Database (NPSDD), established in 2002. These systems were designed to provide reliable data for service planning. Data from these systems are also used to inform policy.  Registration is voluntary and so the systems are not epidemiological datasets.