According to the latest drug-related death figures* from the Health Research Board, 376 people died in 2017 from overdose (poisoning deaths) and there were 410 deaths as a result of medical causes or trauma among people who use drugs (non-poisonings). 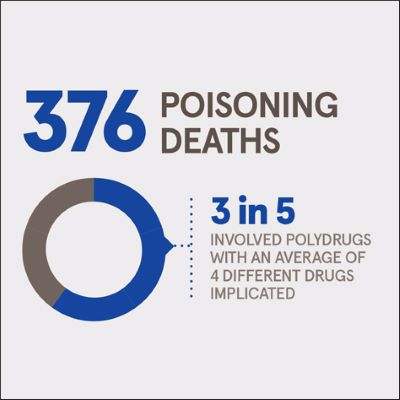 According to Dr Darrin Morrissey, Chief Executive at the HRB,
‘Behind these numbers are people whose lives were cut short. By collecting these data, the HRB can monitor trends over time which helps service providers design appropriate interventions to support recovery and save lives.’

The Health Research Board reports on poisonings deaths (also known as overdose) which are due to the toxic effect of a drug, or combination of drugs, and on non-poisonings which are deaths as a result of trauma, such as hanging, or medical reasons, such as cardiac events, among people who use drugs whether or not the use of the drug had a direct impact on the cause of death.

Commenting on the findings from the HRBs National Drug Related Death Index, Ena Lynn, Researcher Officer at the HRB, says,
‘More than one person died from overdose each day in 2017. They would typically have been male, aged in their 30’s or 40’s and taking a mixture of drugs, many of which are legal, such as methadone, alcohol, or benzodiazepines. A cocktail of drugs was present in 3 in 5 poisoning deaths. Mixing drugs is known to cause more complications and increases the risk of overdose as is evident in this HRB data.’

‘There were 53 cocaine poisoning deaths in 2017, which equates to one death per week. We found cocaine was often mixed with other drugs, in particular benzodiazepines and methadone. Given the sharp increase we have seen in the demand for treatment for cocaine in recent years, we hope that these figures highlight the risks associated with cocaine use.’

The full report is available to download from the HRB website at www.hrb.ie/publications and www.drugsandalcohol.ie/31275. An infographic that outlines key data is also available for download.

*Data for the HRB’s National Drug-Related Deaths Index is collected from four sources: coronial files, the Hospital In-Patient Enquiry scheme, the Central Statistics Office and the Central Treatment List. Data is cross checked and matched across the different sources by HRB staff to give an accurate picture of the number of drug-related deaths in Ireland.

Note: The 2017 figures are likely to be revised upwards when new data become available from closed inquest files.