Cocaine treatment triples between 2015 and 2021

The latest figures from the Health Research Board (HRB) show continued growth in the number of cases* seeking treatment for problem cocaine use, with cocaine overtaking heroin as the main problem drug among cases reported to the HRB. 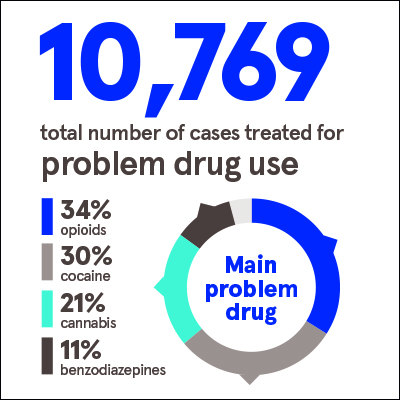 Figures in the HRB report National Drug Treatment Reporting System: 2015-2021 Drug Treatment Data show a total of 10,769 cases were treated for problem drug use in 2021. Two in every five of these cases were new to treatment. Almost one in three cases sought treatment for cocaine.

“This year’s drug treatment figures bring into sharp focus the growing prevalence of cocaine as a problem drug in Irish society. By providing timely data the HRB can deliver important insights into trends in drug treatment that can inform policy and practice in relation to supporting treatment approaches as well as addressing risk factors and prevention.”

“We are observing a sustained increase in cocaine treatment year-on-year. In 2019 we saw cocaine overtake cannabis as the main problem drug; this year the numbers reported as seeking treatment for cocaine exceed those for heroin – which may mark a tipping point in Irish addiction trends. While we are seeing a decrease in the proportion of cocaine cases taking more than one drug, almost two-thirds are mixing cocaine with other drugs. This is a concern as mixing drugs can impact recovery and increase risk of overdose.”

“We have seen some positive developments as regards risk behaviour, with the proportion of cases that had ever injected drugs decreasing from around one-third in 2015 to just over one-fifth in 2021.  The reduction is even more notable for new cases, and in 2021 only 4% reported ever injecting compared to 15% in 2015.

“And while there has been an overall reduction in cases reporting cannabis as a main problem, there is an increase in the number of cases reporting it as an additional problem.”

Additional findings reported are summarised below:

For further information or to organise interviews with experts, please contact:

This report describes trends in treated problem drug use (excluding alcohol) for the seven-year period from 2015 to 2021. The data are drawn from the National Drug Treatment Reporting System (NDTRS), the national surveillance system that records and reports on cases of drug and alcohol treatment in Ireland.