Latest alcohol treatment figures from the Health Research Board (HRB) show 54,263 cases* of people being treated for problem alcohol use in Ireland between 2012 and 2018. 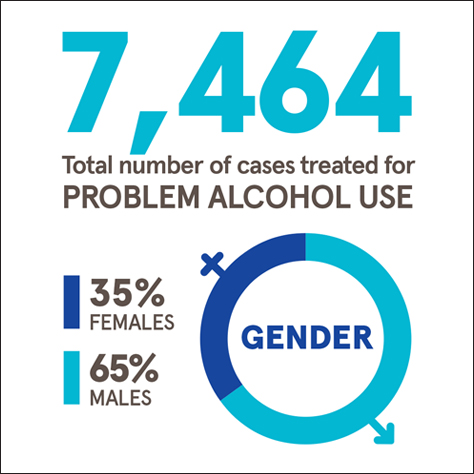 According to Dr Darrin Morrissey, Chief Executive at the Health Research Board,
‘More people receive treatment for alcohol as a main problem drug than any other drug in Ireland. One-in-five cases seeking alcohol treatment also report problem use of other drugs, which is known to make recovery harder.

‘Cocaine continues to increase as an additional drug being used by both men and women who present for alcohol treatment.  This is of concern because mixing alcohol and cocaine can lead to greater physical harm, more severe side-effects and increased impairment.’

Commenting on the trends, which are based on figures from the HRB’s National Drug Treatment Reporting System, Dr Anne Marie Carew, Research Officer at the HRB said,

‘Two-in-three new cases were already dependent on alcohol when they presented to treatment for the first time. This means that more people are presenting when the problem is already severe which makes treatment more complex and recovery more difficult.’

‘On average, both men and women presenting for treatment were drinking more in a typical day than would be recommended by the HSE in one week for low risk drinking. The median number of standard drinks consumed by women on a typical day was 15, while for men it was 20. Evidence shows that the social and health risks from alcohol increase the more you drink.’

A copy of the HRB Bulletin Alcohol Treatment in Ireland 2012 – 2018 and related infographic is available in the publications section of our website www.hrb.ie/publications and www.drugsandalcohol.ie/30970

** Alcohol dependence: Strong desire to consume alcohol, impaired control over use, persistent drinking in spite of harmful consequences, a higher priority given to alcohol than any other activities or obligations, increased tolerance and showing withdrawal reaction when alcohol use is discontinued. Source WHO: The Alcohol Use Disorders Identification Test (2001).

***What is a standard drink? In Ireland a Standard Drink contains 10 grams of pure alcohol.  For example, one Standard Drink is equal to a half pint of normal beer, a small glass of wine (12.5% in volume) or a pub measure of spirits (35mls) www.askaboutalcohol.ie/your-drinking/weekly-low-risk-drinking-guidelines/

Notes for editors
This paper describes trends in treated problem alcohol use in Ireland over the seven-year period 2012 to 2018, as recorded by the National Drug Treatment Reporting System (NDTRS). This information will assist policy makers, service planners and public health practitioners to develop appropriate responses to problem alcohol use in the future.