In a study of over 128,000 patients in the Irish health system, researchers found that uric acid levels increased by 21 per cent over a nine year period, with increases seen in all age groups from young adults to the very elderly. 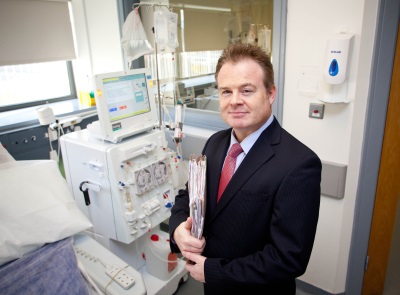 One in four people in the Irish health system have elevated blood levels of uric acid, according to a new study led by researchers at the Graduate Entry Medical School (GEMS), University of Limerick. The largest study of its kind in Ireland has found that uric acid levels here increased at an ‘alarming’ rate from 2006 to 2014.

Uric acid has been linked with a range of conditions from gout to kidney disease. It is a by product of the body's metabolism and is associated with conditions such as heart disease, high blood pressure, stroke and kidney disease.

'What we found was astonishing', says Professor Austin Stack, Principal Investigator for the UL Kidney Health Consortium and a senior author of the study.

While this was not a national random sample, it included a very large group of patients from all demographics within the health system. We identified rising levels of uric acid in every subgroup of patients and in all clinical settings between 2006-2014; whether they attended outpatient clinics, were hospitalised as inpatients, or visited their GP in general practice', says Professor Stack.

Uric acid is a waste product and produced when the body breaks down ‘purines’ found in many foods, drinks and alcohol. About 30 per cent of uric acid production is attributable to diet and lifestyle factors such obesity and food intake, especially foods containing fructose such as sugary drinks.

'There is increasing evidence to suggest that high uric acid levels may be a causal factor in kidney disease', says Professor Austin Stack. 'Each year in Ireland around 400 people start on dialysis for kidney failure. However, kidney disease is detected in around 15 per cent of all patients entering the Irish health system'.

Uric acid is also a cause of Gout, a common arthritis when uric acid crystals build up in the joints.

'In addition, and possibly even more concerning, high levels of uric acid are directly linked to the development of several major diseases including high blood pressure, diabetes, kidney disease, heart attacks and strokes', says Professor Stack, who is Foundation Chair of Medicine at GEMS and Consultant Nephrologist at the University Hospital Limerick. 'Rising blood levels of uric acid mean that more patients are at risk of these serious conditions'.

'Findings like these illustrate the power of research to inform fully joined up approaches to both delivering health care and preventing disease in the first instance'.

More information is available from the press release on the University of Limerick website.

The study 'Temporal trends in hyperuricaemia in the Irish health system from 2006-2014: A cohort study' is published by PLOS One and authored by Arun Kumar A. U., Leonard D. Browne, Xia Li, Fahd Adeeb, Fernando Perez-Ruiz, Alexander D. Fraser, Austin G. Stack and is available online at https://doi.org/10.1371/journal.pone.0198197