In a HRB-funded summer project, James Mac Carthy developed new tools to help promote public and patient involvement in health research. He spoke to Dr Claire O’Connell about his motivation and the benefits of thinking beyond the lab. 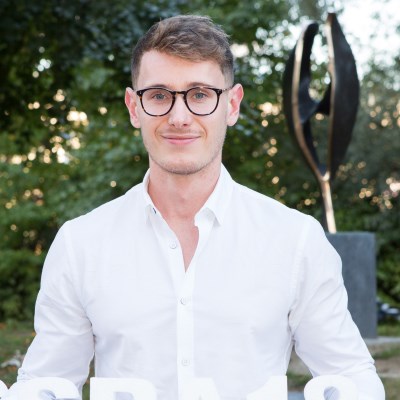 Summer projects can be surprisingly productive. For James Mac Carthy, signing up to a HRB-funded project was very productive indeed: he worked on new ways to help promote public and patient involvement in health research and helped to develop a tool to track how patients engage with a research project as it is happening.

As an undergraduate on the Biomedical Sciences programme in University College Dublin, James received an email outlining the summer project, and to him it looked different and interesting. ‘It appealed to me, because the project wasn’t based in a lab, and I knew I would be doing a lab-based project as part of my course, so this would give me experience of another type of research’, he says.

He signed up for the eight-week project with supervisor Dr Emma Dorris, who is head of the UCD Arthritis Research Group. James’s job was to help with the public and patient involvement, or PPI.

‘PPI basically looks to carry out research with patients as opposed to for or about them’, he explains. ‘It looks to involve them in the research and lets their voice be heard to direct the path of research that is relevant to them’.

The whole approach is undeniably good-natured, notes James, but there are barriers, and one of the starting points in his research was to identify what researchers saw as barriers to PPI. ‘For many researchers, PPI is becoming a condition of funding, so they need to implement it’, says James. ‘We gathered researchers together and asked them how they felt about implementing PPI and the kinds of barriers that stood in their way’.

Many of the answers were about the time involved, and the lack of training and communication that researchers had for engaging with patients. ‘Researchers have a lot on their plates, and we were hearing that implementing PPI was a struggle, in part because of time and in part because they didn’t have much guidance on how to do it’.

In order to help researchers work through these barriers, the UCD team developed a tool that lets them work through potential problems, mapping them out almost in a flow-chart, explains James. ‘It asks them to come up with solutions to those challenges, to identify in advance how they might overcome them’, he says.

While James was involved in that work, the meat of his research lay in developing another tool, one that meant patients could record their levels of satisfaction during a PPI project, so that researchers could get a real-time alert if there were problems brewing. ‘The survey is deigned to facilitate the ongoing evaluation of PPI as a research initiative is taking place’, he explains. ‘After 3-6 months, this survey would be given to patients, they would be asked to assess the initiative by responding to a series of prompts or questions on an 11-point scale’.

James sought the advice of survey expert Dr Suzanne Guerin at UCD to develop the tool, and, very importantly, he sought he advice of patients. ‘It was like doing PPI on my own project’, he says. ‘I sent the test surveys out to people who were taking part in the Patient Voice in Arthritis programme in UCD and they were able to tell me what they wanted to be asked about , and to point out where the language needed to change to be more readily understandable’.

James was a named author on a recent paper describing the PPI tools in the journal PLOS ONE. He presented his results at the Student Summer Research Awards in UCD and he also got the chance to talk about the findings at a conference in Newcastle in the UK. ‘Lots of people were interested in it’, he says. ‘The idea of assessing PPI as it goes on, that went down well with people’.

Following the successful summer project, James went on to his final year of the Biomedical Health & Life Sciences course in UCD, completing his lab project as part of it. ‘I worked on a bacterium called Campylobacter that lives in chicken’, he explains. ‘It doesn’t make the chickens sick, but if it is not cooked and killed and it gets into humans, it can make us sick with food poisoning’.

For his project with Dr Marguerite Clyne, James found that the bacterium behaves differently at varying levels of acidity, which is of interest as it survives the acidity of the stomach both in chickens and humans. ‘It was an interesting question I wanted to look at’, he says.

With the degree in the bag, James is looking forward to doing a Masters in Business and Biotechnology at Smurfit Business School in UCD, where he will learn about another aspect of health research: how medications are brought to the market.

Throughout his scientific studies, James has kept busy with another side to his life: he is a fitness instructor. A life-long interest in sports – mainly rugby as a child and teen – led to him becoming qualified as a spin and gym instructor after he left school. It is a move that has stood to him during his student days.

‘I found that the hours were long for studying biomed, and my rugby training often clashed with lectures or lab times, so reluctantly I had to give up the rugby, which was a bit frustrating’, he says. ‘But the upside is that I have been able to keep fit by instructing gym and spin classes, and that has also meant an income!’