Dr Ian Kelleher has just received a HRB Emerging Clinician Scientist Award to search for signs in childhood that point to an increased risk of psychosis later in life. He talks to Dr Claire O'Connell ... 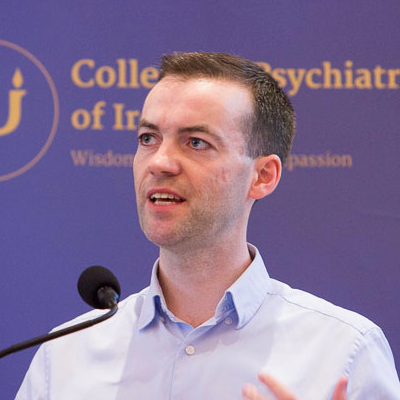 Have you ever heard voices inside your head? It is one of the best-known and widely stigmatised symptoms of psychosis. But hearing voices in your head in childhood is more common than you might think, and in many cases it is no cause for concern.

That’s according to research carried out by Dr Ian Kelleher and colleagues, which shows that almost one in five 9-12 year olds have these experiences, and that most of them grow out of it.

In addition, the timing of growing out of it may provide important clues about who could benefit from support and interventions to minimise the risk of future mental health conditions.

Ian, who has just received an Emerging Clinician Scientist Award from the HRB, is a child and adolescent psychiatrist – a medical doctor who specialises in the assessment, diagnosis and treatment of neurodevelopmental and mental health disorders. Because psychosis generally emerges in early adulthood, this means he sees or diagnoses relatively few people with psychosis compared to his colleagues in adult psychiatry. But he wants to know what early signs could be there even in childhood.

‘Although most cases of psychosis are diagnosed by adult psychiatrists, not child psychiatrists like me, we know that people who are diagnosed with psychosis in adulthood often had a range of problems earlier in their lives, such as in the development of language abilities, cognitive skills, motor coordination, and social and emotional development’, explains Ian, who will be taking up the post of Research Associate Professor of Psychiatry at Trinity College Dublin.

To find out if there were other signals or indicators in childhood that could point to an increased risk of psychosis and other mental health issues later in life, Ian and colleagues have carried out extensive surveys, interviews and follow-ups with children and adolescents in Ireland, and have also analysed large databases of health information internationally.

That work showed that, on average, around 17% of children between the age of 9 and 12 had heard voices in their heads, then that number fell to around 7% in teens and 4% in adults.

‘When the results came out, people were surprised at how common it is, except for Child Psychiatrists’ says Ian. ‘But this is another example of how we still slip into traps of viewing children as ‘miniature adults’, whereas the mental experiences of children can be very different to that of adults’.

Ian argues that transient auditory hallucinations could be a relatively common developmental experience in childhood, and it is when they persist into the teenage and adult years, it could signal that something is up with the communication in the brain.

‘During adolescence, the brain prunes back a lot of connections or information pathways to make things more streamlined’, he explains. ‘This is a normal process and I describe it as being like getting rid of old roads you don’t use a lot and strengthening the motorways that you use all the time. If something goes wrong in this process, you might end up with these ‘roads’ connected in haphazard ways, rather than ways that allow rapid efficient communication between different parts of the brain. Continuing to hear voices into adulthood might be a sign of miscommunications in the brain’.

In recent years, Ian has taken a ‘big data’ approach to looking for early clues such as hearing voices into later years. He has been analysing a database from around 60,000 people born in Finland in 1987, which allows him to track their healthcare interactions through childhood and adolescence into early adulthood.

Thanks to the Emerging Clinician Scientist Award, Ian will progress the research using even larger health information datasets from Finland and the UK. Overall, that means analysing data from more than quarter of a million people.

‘Because psychosis is relatively rare, with maybe 1% of a population having schizophrenia, you need to analyse data from large numbers of people in order to pick up on changes that could be linked to developing those conditions’, he says.

Finding reliable early markers of psychosis risk would help to identify people who need help, he notes. ‘If we can identify people at risk earlier, it means we can intervene earlier – including intervening during the crucial period of brain development when it comes to this pruning process, which occurs in adolescence. There are some really exciting studies showing how some agents, for example some anti-inflammatory agents, could protect the brain during this critical process of pruning brain connections’, says Ian. ‘Knowing who is at risk would help inform whether these neuroprotective agents could help them, and it could also reinforce the need for them to be aware that substances such as cannabis could put them at even higher risk of developing psychosis’.

Ian’s interest in the area was sparked early during his own childhood in Cork, when his mother went to college as a mature student, and one of her subjects was psychology. ‘I think when you see your parents prioritise something, you see the value in it. I was about nine or 10 and I was curious about it’, he says. ‘She had a book on child development and personality and I read it and I was fascinated by it’.

Ian went on to study psychology in University College Dublin. He started dating a medical student during this time, and he wondered if that might be a path for him too. ‘I was Interested in brain so I did a Master’s degree in neuroscience at King’s College London’, he says. ‘I knew I was testing myself, that if I liked it then medicine was for me. And I loved it, so I went from that to studyinga medical degree’.

Throughout his studies, Ian loved doing research, and he did a Ph.D. in psychiatric epidemiology along the way. He specialised in psychiatry, and today he finds it particularly rewarding to work with young people. He is currently a Child and Adolescent Psychiatrist at the Lucena Clinic Child and Adolescent Mental Health Service. ‘I love seeing young people’s lives turn around for the better. We’ve become very good at identifying and treating some neurodevelopmental disorders in Child Psychiatry’ he says. ‘I want to see the same advances in treating children at risk for psychosis. That is what keeps driving me’.

Coping in a time of COVID

Ian and his college partner are now married with a young son, and the COVID-19 pandemic has meant much juggling for the family, particularly when they can’t get childcare.

At the moment, Ian divides his time between the clinic and their home in Dundrum, where he can consult with patients online.

‘It means working in a more flexible way, and I think a lot of the barriers to virtual or telemedicine are falling away because of this pandemic, which is potentially a good outcome. Everyone was caught off guard by this pandemic but Lucena Clinic moved quickly to get our clinical services running online as much as possible’ he says.