Good health at every age

Professor Patricia Kearney is looking at health and disease across the lifecourse, and taking a data-driven approach to population health. She spoke to Dr Claire O’Connell about her work. 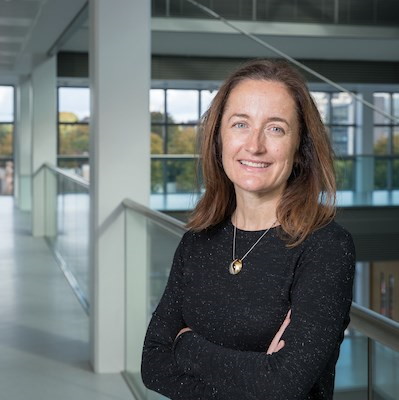 Professor Patricia Kearney wants you to be healthy, no matter where you are in life. As an academic in the UK, the USA and in Ireland, her research has been looking at chronic illness and public health issues as varied as the diet and physical activity of children, whether cholesterol-reducing medicine helps people with diabetes and how people in Ireland are ailing or thriving in their older years.

So far, Patricia has marked several achievements in her career, including a HRB Research Leader Award, being the first person outside the USA to receive a Beeson Fellowship and, in 2018, being named Researcher of the Year at University College Cork, where she is Professor of Epidemiology.

Patricia recalls being interested in health from an early age, and it was reflected in her choice of play activities when she was growing up in Cork. 'I always wanted to be a doctor,' she says. 'When I was a small child, I pretended my bedroom was a hospital and I would bandage up the dolls and teddies.'

Patricia went on to realise her childhood ambition, studying medicine at UCC and working as an intern before developing an interest in research, particularly health systems and population health. She got her Masters degree in Tulane, USA, and did a PhD at Oxford University, where she analysed data from clinical trials of cholesterol-lowering medication for people with diabetes.

'People with diabetes often have normal or low normal cholesterol levels, and the question was should they be treated with medications, such as statins,' explains Patricia. 'My work demonstrated very clearly that statins do have the same benefit for cardiovascular disease prevention in people with diabetes.'

Patricia returned to Ireland and was awarded a Paul Beeson Career Development Fellowship, the first time that the National Institutes of Health awarded it to someone outside the USA. She worked on the early stages of The Irish Longitudinal Study on Ageing (TILDA) at Trinity College Dublin, which was set up to explore the health of people in Ireland over the age of 50.

'That was a fantastic experience,' says Patricia. 'We were discussing the questions we were going to ask, and how we could carry out health assessments of people, it was exciting to get to shape this long-term study. That was back around 2007, and TILDA is still producing data that I use in my research today.'

Patricia’s work on TILDA also led to her working for a year at the Center for Aging and Population Health in Pittsburgh, setting up a clinical trial on using aspirin to help prevent heart attacks and strokes in older people.

Since moving to UCC, Patricia has continued to look at chronic illnesses, most notably heart disease and diabetes. In 2013, she became one of six recipients nationally to receive a prestigious HRB Research Leader Award that brought together and validated data about how common diabetes and its complications are in Ireland, and she now leads a HRB-funded Interdisciplinary Capacity Enhancement (ICE) award to bring that data-driven approach to look at other chronic diseases and their care here. 'This is important, because as the population ages in Ireland, we will see more of these diseases and we need to work on care and prevention,' she says.

Prevention of disease is best started early, and Patricia works not only on adult health but on the diet and activity of children in Ireland, seeing to establish the groundwork for minimising obesity, a condition that is pushes up the risk of several chronic illnesses. “We are looking at the most effective way to provide information for parents about early nutrition and breastfeeding for babies,' explains Patricia.

'We want to find out the best ways and times for health professionals to work with parents on this and support the guidelines around encouraging breastfeeding and weaning babies onto solid food. We are also looking at physical activity levels in older children, and we can see quite clearly that during the school day there is much less variability between how much children move, but after school that changes, with some children being much more active than others. We need to think carefully about not creating environments that promote obesity.'

The joy of impact

Outside of work, Patricia’s own activities also focus on health. 'I go running and cycling and I am fortunate to be in a position to make the decisions to do that,' she says.

She also enjoys mentoring and supporting early- to mid-career researchers. 'When I was starting out in research, I had some great mentors, including Professor Ivan Perry here in UCC, and Professor RoseAnne Kenny in TILDA,' she says. 'Now I have a wonderful team and I enjoy supporting them and seeing them make progress, have new ideas and get grants for themselves. And it works both ways, if I am struggling with a research question or issue, I can talk to them about it.'

Patricia also enjoys that moment when she hears a research proposal is to get funding. 'That’s a good email to get, it gives me a boost,' she says. 'Because the research has an impact on people, on policy makers who can use the information about health, and people contact me looking for information. Being in a position to provide that is a fantastic privilege.'