Diving into evidence for better trials and maternity care

Professor Declan Devane has spent much of his career seeking evidence to improve maternity care and strengthening how we generate and synthesis that evidence more generally. The main lesson? Keep asking questions! He talks to Dr Claire O'Connell ... 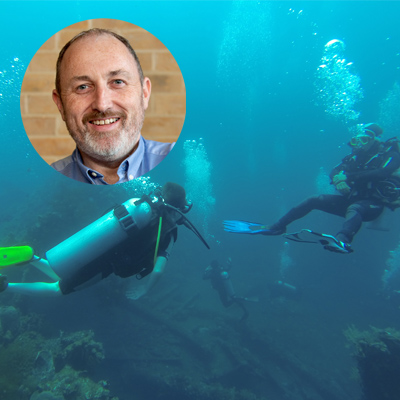 Declan and his then 8-year old son dive the wreck of the USS Liberty, 2018.

When Declan gets the opportunity, he loves to go SCUBA diving. He thinks he needs to do make time to do more. When he does, the best spot he has found under the waves so far is Lettergesh in Connemara. 'There’s nothing like diving in a clear, cold Atlantic', he says. 'It’s completely unspoiled. Mind you, I wouldn’t say no to the Maldives'.

In his work as a researcher, Declan also spends quite a bit of time diving: this time into evidence, looking for answers that can help to deliver safer, more patient-friendly healthcare. 'I am interested in evidence and in how we use that evidence to inform healthcare decisions', says Declan, who is Professor of Midwifery, NUI Galway. 'These decisions are crucially important not only for clinicians but also for policy makers and the people who fund research, we need to know that what we are doing in healthcare is grounded in best evidence'.

Declan originally trained and worked as a midwife, and he can see in maternity services that sometimes approaches are taken because it has been done that way for a long time. 'We have a long history in maternity care in having assumed the interventions we perform with the intention of benefitting would be of benefit, and we can sometimes be slow to question whether that benefit actually exists', he says.

Maternity care, like many other areas of health care, have many examples of long held beliefs about the effectiveness of things we do to improve care not holding true once tested empirically. One example is fetal heart rate monitoring during labour as a measure of how the fetus is doing.

'When electronic devices came in to measure the heart rate continuously, there was a wide assumption that it had to be a better approach than checking the heart rate every so often with a hand-held device', says Declan. 'But when that was questioned and trials conducted, continuous electronic monitoring just hasn’t shown the benefits that were assumed. We need to think critically about everything we do, keeping to the fore of our minds that knowledge can have a short shelf life and we need to keep asking questions'.

For Declan, improving the journey or pathways of women accessing maternity services is important, and he has worked on numerous projects with many colleagues to help achieve this. They include assessing midwife-led models of are, approaches to the onset of labour and how best to assess fetal wellbeing.

'We want everything to be grounded in evidence, and sometimes the evidence will tell you the best thing is not to intervene', he says. 'It’s funny but when student midwives start off in their work, they often talk about all the interventions we can do. Then over time they see the expertise is in having the wisdom and confidence to not intervene when appropriate. We need to keep asking why we do things a certain way, and whether it is better to change it or not do something'.

This is where Declan’s passion for trials shines through. As the Director of Cochrane Ireland and Evidence Synthesis Ireland and Scientific Director of the HRB Trials Methodology Research Network (TMRN), he looks to strengthen the quality and methods of how evidence is generated and synthesised.

For one thing, we need to figure out how to encourage people to take part in clinical trials. 'We know from research that about 50 percent of randomised trials will fail to recruit adequate numbers of people to answer the question the trial is asking', says Declan. 'That means that not only are millions of Euro being wasted every year on trials that can’t function properly, we have almost no evidence about steps or interventions to recruit people effectively onto trials'.

Declan is keen to get the next generation of researchers and citizens thinking critically, and the HRB-TMRN runs an annual competition called START, which asks primary school children to design and run their own studies.

'It’s a serious competition but the questions the children ask can be fun',' says Declan. 'They ask questions like whether playing music in the background has an effect on your ability to do your homework, or if playing games is a help when you are learning to spell words. The children design, plan and carry out their own trials and they analyse the data and draw conclusions'.

Another initiative he really enjoys is work with colleagues on helping primary school students critique health claims and information, to get them to question what they are being told.

'We think about claims like burnt toast can cause cancer or a vaccine causes autism or wearing a copper bracelet can help people with arthritis', says Declan. 'We show them how to go about identifying the evidence and assessing it, and we can see that 8-10 year olds are well able to do this. In an era of ‘false news’, that’s got important implications for future informed citizens'.

With so much going on, it’s no surprise that Declan’s research group has a snowglobe as its logo on their WhatsApp group. 'I’m sure my team will give a different reason for choice of logo but to me it represents how we can have what seems like a simple question about ‘how we can make better evidence inform decisions and improve evidence for decisions?’, but when we shake it we find that there are so many different questions within that….we have lots of questions we’d like to try to answer', he says. 'And to me having all those elements means generating and providing better quality evidence for healthcare'.

Declan enjoys the challenge of keeping up with his work and the inspiration his team brings but he stresses the importance of downtime and knows he should probably try to get more. He says. 'I like to think I work hard and play hard. Let’s see'.