Outputs, outcomes, and emerging impacts: Results from HRB-funded awards that completed in 2018–19

This report presents a snapshot of the outputs, outcomes, and some emerging impacts arising from 170 Health Research Board (HRB) awards (with a combined value of €49.5 million) that completed in 2018 and 2019. Further outputs, outcomes, and impacts can be expected to occur in the years following the completion of these awards. The outputs and outcomes reported in 2018 and 2019, combined with those from past reporting periods, provide 12 years of evaluation data from completed HRB awards and, where possible, trend analysis of these data is provided.

This report demonstrates that HRB-funded award holders are highly productive across the full range of Payback categories, with increases in many output metrics since 2008. For example, the 2018–19 reporting period showed the highest ever average number of new research materials and methods, and number of healthcare innovations, per award.

Given the HRB’s strategic objective as part of its mission statement to “generate relevant knowledge and promote its application in policy and practice”, it was positive to see a significant increase in reported engagement outputs with policymakers, healthcare providers, and decision-makers, with the highest ever number of policy and practice outputs reported from awards that completed in 2018–19. The number of award holders publishing in open access compliant journals or on open publishing platforms has also increased steadily since becoming a mandatory requirement, from 56% in 2014–15 to 85% in 2018–19.

The HRB’s increased emphasis on supporting Population Health Sciences (PHS) and Health Services Research (HSR) within a multidisciplinary collaborative funding model, along with the importance that international peer review panels place on methodological rigour, is reflected in the observed upward trend in research within these broad research areas since 2008, with the number of HSR publications tripling since 2016–17. Importantly from a capacity building perspective, one-half of all positions supported by HRB awards were associated with awards within the HSR and PHS broad research areas. Staff with a health and care background accounted for 39% of the total number of staff supported.

The success of the HRB’s implementation of public, patient and carer involvement (PPI) supports since 2017 and the requirement to integrate PPI into many schemes is reflected in the high level of PPI reported in 2018–19. Growing numbers of award holders are including meaningful engagement with the public and patients at all stages of the research process, and a better understanding of what PPI means is developing in the research community.

HRB award holders collaborated extensively with international partners in 20 countries. For the second time since 2008, the amount of additional research funding leveraged by HRB award holders exceeded the original HRB investment in their awards, with €2.02 leveraged for every €1.00 invested by the HRB in awards ending during the 2018–19 reporting period. Thirty per cent of the leveraged funding came from non-exchequer sources in Ireland and overseas. This finding reflects Irish health researchers’ increased success in winning funding from the European Union (EU) Framework and other programmes.

Finally, for the first time, this report presents an analysis of secondary data usage by HRB researchers, which is a growing area of interest for the HRB. 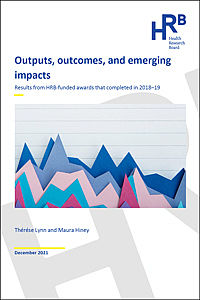 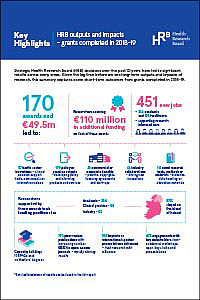