Harms and benefits of e-cigarettes and heat-not-burn tobacco products. A literature map

Most of the observed harms were due to acute events associated with the use of e-cigarettes. They included poisonings, burns, fractures, lung injury and exacerbations of asthma. There were fatalities among the poisonings and respiratory disease cases, and long-term disability among some burn cases. There was some early evidence of damage to cardiovascular and respiratory tissue, mainly due to metals and volatile organic compounds. Four cross-sectional surveys on cancers identified the presence of carcinogens for lung, oral, and oesophageal cancer, and one identified biomarkers for bladder cancers. Some respiratory, cardiovascular, and oral diseases were noted to be less harmful in e-cigarette users than in conventional cigarette smokers, but were as harmful in dual users. 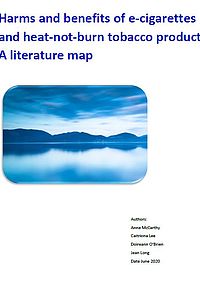