Although half of the world’s population does not drink, alcohol use is the seventh leading risk factor for both deaths and disability-adjusted life years globally, and the leading risk factor among those aged 15–49 years. Alcohol is a modifiable risk factor; reductions in alcohol consumption would lead to an associated reduction in the burden of disease, not only from conditions such as alcohol dependence and alcoholic liver disease, but also from commonly reported health conditions, including cardiovascular disease and cancer. Ireland has a high level of alcohol consumption and many Irish people engage in harmful drinking patterns.

In 2009, the Government established the National Substance Misuse Strategy Steering Group to formulate an alcohol policy for Ireland. In 2012, the steering group published their recommendations, many of which were ultimately incorporated into the Public Health (Alcohol) Act 2018. The steering group report recommended that the Health Research Board (HRB) act as joint lead on the recommendation to collect information on the appropriate alcohol epidemiological indicators. To achieve this goal, the HRB periodically publishes overviews on the alcohol situation in Ireland, and the most recent one was published in 2016. This is the fourth alcohol overview undertaken by the HRB. The purpose of this overview is to update the data and information contained in the previously published overviews in order to assess the current situation in Ireland regarding alcohol consumption and harm, and policy responses, and to analyse trends over time. It is compiled using a variety of Irish data sources. 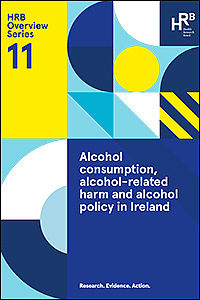