Congratulations to Ben Loughnane from Kinsale Community School who won both the HRB Special Prize and came first place in the Social and Behavioural Sciences Category Intermediate Awards for his intriguingly named project 'A statistical investigation into the power of zero'. The project looked at a new way to better estimate your heart attack risk. 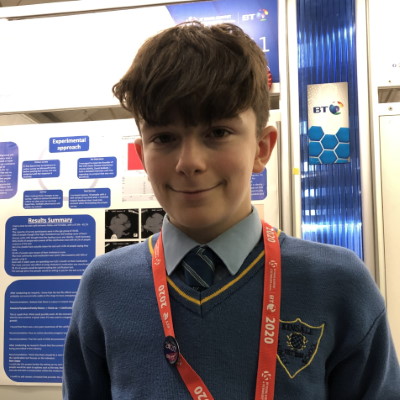 Ben takes up the story,

'I got the idea for my BT Young Scientist project when my dad was diagnosed with high cholesterol and prescribed medication from his GP. Through advice from a friend he took a heart scan known as the calcification test. He received a zero score and after expert advice he found that he did not need to be taking any medication because this zero score supposedly meant that he was not in any danger of developing heart disease.

When I was trying to think of an idea to do for my project, I recalled that my family and I had little or no knowledge of the test my dad had taken and the whole topic surrounding it.

I decided to set out and find out about the test and what its purpose is, and then to see could other people such as my father avoid the use of unnecessary medication. That is, reducing their need to spend money on the medication and avoiding potential side effects they may be experiencing as a result of taking the medication.

I felt that this could be an important issue because a lot of people take statins and many people in Ireland do have high cholesterol'.

Ben's research found that while the test fits official screening criteria (Wilson and Junger classic screening criteria) and is recommended by the European Society of Cardiology, there is both limited availability to do the test and a lack of knowledge about the test in the medical community.

Ben conducted a survey to find out what people knew about heart disease and cholesterol in general, the calcification test, and how much money they might be prepared to spend to have the test done themselves.

'After conducting my research, I found that the current heart disease risk assessment system is over 60 years old and outdated in its methods.

'The future of Ireland's health research is obviously in good hands. I'd like to congratulate Ben and indeed all the other entrants into the competition for some really outstanding work that belies their young years'.