The latest figures from the Health Research Board (HRB) reveal an overall decrease in admissions to psychiatric units and hospitals in 2020 as a result of strict public health measures related to the COVID-19 pandemic. 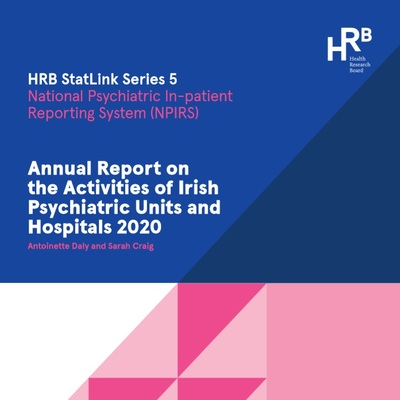 "There has been a great deal of public discourse on the effects of societal restrictions on mental health and wellbeing. The figures indicate increasing and/or decreasing demand for treatment among different groups. In reviewing this year’s figures it’s important to note that while fluctuations in the number of admissions may reflect real changes in demand for psychiatric treatment, they also reflect the compliance with COVID-19 restrictions, which required a reduction in the number of inpatient beds and a need to facilitate social distancing."

Admissions for under 18s

According to Dr Sarah Craig:

"A key benefit of the HRB psychiatric inpatient reporting system is that we can identify trends within psychiatric admissions over time that can help ensure services match people’s needs. For instance, the number of admissions with depressive disorders among under 18s was similar to 2019 while the number of admissions with neuroses and schizophrenia both decreased. The number of under 18s admitted with an eating disorder increased for the third year. However, several repeat admissions for eating disorders among the age group during 2020 account for much of this increase."

"While we note that the 2020 fluctuations in admissions predominantly reflect the societal restrictions in place throughout the year, the HRB will continue to identify and monitor these trends as we emerge from the COVID-19 pandemic to determine where needs are emerging to inform service planning."

"A positive observation from our 2020 data is that the number of under 18s admissions to adult psychiatric units and hospitals continues to decrease in line with policy."

** Including admissions to independent/private child and adolescent units.

The Annual Report on the Activities of Irish Psychiatric Units and Hospitals 2020 is available on the HRB website here. An infographic that outlines key data is also available for download.