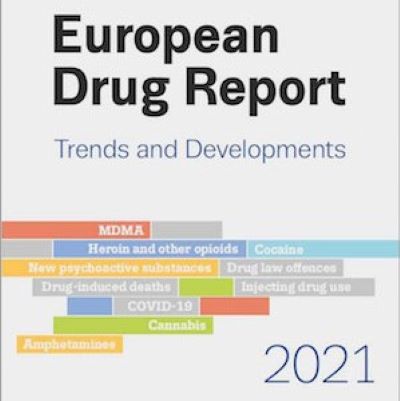 The purpose of this report is to provide an overview and summary of the European drug situation up to the end of 2020. The analysis offered in the report must be regarded as preliminary as a result of the impact of COVID-19. The Health Research Board (HRB) provides the Irish data and research featured in the EMCDDA report.

The brief below provides:

All routine indicators suggest that at the beginning of 2020 there was widespread availability of a diverse range of drugs of increasingly high purity or potency on the European drug market.

Drug production and trafficking appears to have adapted rapidly to pandemic-related restrictions, and there is little evidence of any major disruptions in supply. Drug traffickers have adapted to travel restrictions and border closures with smuggling via intermodal containers and commercial supply chains and rather than human couriers. This is illustrated by the large seizures of cocaine and other drugs observed during 2020.

Although street-based retail drug markets were disrupted during the initial lockdowns, drug sellers and buyers appear to have adapted by increasing their use of encrypted messaging services, social media applications, online sources and mail and home delivery services.

Diversity in supply and use of drugs

The patterns of use are becoming more complex, with people who use drugs being presented with a greater selection of substances. This is creating various health harms, as a result of the use of more novel substances or from the interaction of the effects when multiple substances are used in combination. Some countries are seeing an increase in crack cocaine availability and use. There are reports of the availability of smaller doses or cheaper packages of heroin, crack and benzodiazepines.

Benzodiazepines, either diverted from therapeutic use or benzodiazepines not licenced for medical use in Europe, are appearing on the illicit drug market. Increased use of benzodiazepines was seen among high-risk drug users, prisoners and some groups of recreational drug users, potentially reflecting the high availability and low cost of these substances and pandemic-related mental health issues.

There is increasing availability of high-potency products.  Reports indicate that cannabis cultivation and synthetic drug production within the European Union continued at pre-pandemic levels during 2020. The picture is complicated by highly potent synthetic cannabinoids, which have often been used to adulterate natural cannabis products.

Drug use prevalence and trends

Cannabis is the most commonly used drug across Europe– the prevalence of use is about five times that of other substances. While the use of heroin and other opioids remains relatively rare, these continue to be the drugs most commonly associated with the more harmful forms of use, including injecting. The extent of stimulant use and the types that are most common vary across countries, and evidence is growing of a potential increase in stimulant injecting.

EMCDDA Director Alexis Goosdell highlights: "We need urgently to recognise that, not only is a wider variety of people now personally experiencing drug problems, but these problems are impacting on our communities in a wider variety of ways. This is why I believe it is crucial, across the areas of social, health and security policy, to develop the evidence-based and integrated responses envisioned by the new EU Drugs Strategy."

Minister Frank Feighan TD, Minister of State for Public Health, Well Being and National Drugs Strategy said: "I welcome the publication of the European Drug Report 2021. The issue of drugs affects people, and the communities in which they live, in a wide variety of ways. These problems cannot be tackled in isolation, which is why the EU Drugs Strategy will be critical in the coming years in providing the tools to address these issues collectively."

Minister Feighan added: "The European Drug Report illustrates to us that the patterns of drug use are becoming more complex. People who use drugs are being presented with a greater selection of substances, which can lead to increased health harms. The impact of COVID-19 has also drawn attention to the health inequalities experienced by people who use drugs. It is important that we continue to develop harm-reduction measures to protect people who use drugs and vulnerable groups."

Europe: A record 213 tonnes were seized in 2019 (up from 177 tonnes in 2018). Cocaine purity has increased and more people are entering treatment for the first time. Preliminary seizure data in 2020 suggest availability has not declined in the pandemic.

Europe: Alongside the dismantling of production facilities in 2019, chemicals used to manufacture amphetamine were also seized in the EU, including 14 500 litres of BMK and 31 tonnes of MAPA (up from 7 tonnes in 2018).

Ireland: FSI recorded a slight increase the number of analyses of amphetamine seizures between 2017 and 2018. A further approximate threefold increase was recorded in 2019 relative to 2018.

Risks to health from supply of high-strength MDMA products

Europe: In addition to increases in the average MDMA content in tablets and the purity of powders, products with very high levels of MDMA are also being detected. Preliminary data from 2020 suggest there was less interest in this drug during periods of lockdown.

Ireland: Data received from FSI have shown that the number of MDMA analyses in 2019 was more than three times higher than in 2018.

Large heroin seizures signal potential for increased use and harms

Europe: Large volumes of heroin are still being seized in the EU (7.9 tonnes in 2019), raising concerns around the possible impact on levels of use.

Europe: An estimated 1.5 million drug law offences were reported in the EU in 2019; 82% were related to use or possession for personal use.

First-time treatment clients for heroin use continue to inject less

Europe: Although injecting drug use has been declining in Europe for the past decade, it remains a major cause of drug-related harms.

Ireland: Injecting drug use among new entrants to treatment with heroin as their main problem drug has decreased steadily since 2015.