Yes is the answer according to research conducted by transition year student Leah Nolan from Loretto Secondary School Cork. The finding came as part of her winning entry into this year’s BT Young Scientist Exhibition. 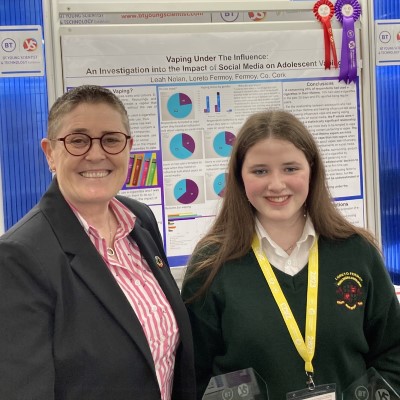 Leah won the Health Research Board special award and took first place in the Social and Behavioural Sciences Intermediate category with her project “Vaping Under The Influence: An investigation into the impact of social media on adolescent attitudes towards vaping.”

“I had seen articles in the news saying how vaping rates were increasing among young people and was interested to know more about how social media might influence those rates’, explained Leah.

After designing and piloting a detailed survey, Leah sent it a to all 728 secondary schools in Ireland and received over 2,000 responses.

“I found a statistically significant link between teenagers seeing vaping friendly content on social media and in online adverts and teens reported levels of vaping.

“The strongest association was correlated with social media influencer accounts, and the least with standard advertisements. Micro influencers, accounts with between 10,000 – 1 million followers were found to be most influential.’

According to the survey:

Dr Teresa Maguire, Director of Research Strategy and Funding at the HRB presented Leah with her prize commenting,

“This is a fascinating piece of work that highlights how social media can influence teenagers’ behaviours around vaping and e-cigarette use.

“We know from a HRB evidence review that adolescents who use e-cigarettes are three to five times more likely to start smoking tobacco compared to those who never used e-cigarettes.

“Leah’s research gives a revealing insight into the influence of social media, social media influencers, sponsorship and product placement into young people’s decision making. Her project is a very worthwhile winner of the HRB special award and we wish her every success in her future.”