Congratulations to Laura O'Sullivan from Cork who won the HRB special prize at this year's BT Young Scientists exhibition. 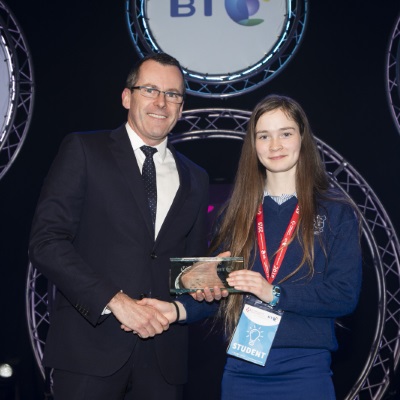 Laura's project demonstrated that artificial intelligence (AI) could play a role in cancer screening programmes. She describes her winning project 'Improving Cervical Cancer Screening with Artificial Intelligence' in her own words.

'I started off with a freely available dataset of normal and abnormal cells that I downloaded from a hospital in Denmark, and an open source artificial intelligence programme.

From this 'initial balanced set' of 240 normal samples and 240 abnormal ones, I was able to expand it to almost 2000, and instead of that 50:50 ratio of healthy cells to unhealthy ones, I now had a much more 'normal' ratio between healthy and cancerous samples, the sort of ratios that you would typically expect to see in a population cancer screening programme.

I coded some algorithms in a computer language called Python and was able to train the AI programme to successfully identify abnormal cells with what looks to be like more accuracy than existing detection rates. And as an added bonus, the AI seemed to have a reduced rate of false negatives, which obviously avoids missing any abnormal samples which could potentially lead to cancer going undetected’.

'Laura's project gives real food for thought about the role that AI could play in cancer screening programmes. She has demonstrated incredible research skills and I wish her every success in her future'.