300 out of 312 respondents to a recent survey - supported the idea of having observers at HRB funding application panel meetings. 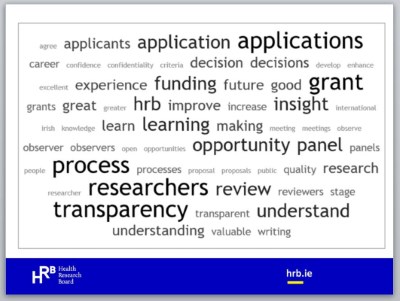 The survey also captured some great ideas on how to increase transparency about the process and ensure people understood feedback more clearly so they could learn from what was discussed at the panel.

According to Dr Anne Cody, HRB,

'There were many enthusiastic responses, and the words ‘transparency’ and ‘transparent’ were mentioned 97 times. ‘Learning’ and ‘learn’ was also a popular term and was referenced 77 times. There were many suggestions made on how to manage different aspects of the process'.

'The main concerns raised were around the issue of maintaining confidentiality, the potential to impact on the review process, safeguarding interviewees and also some comments that this is not going far enough and that applicants should be allowed to hear the discussion of their own application'.

'The HRB will now consider how to take this forward, and will post an update later in the summer'.