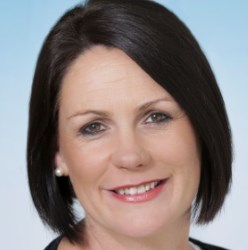 'Approximately 1300 people attended the four-day conference', said Dr Craig. 'It was interesting to see more papers at the conference in the area of 'big data', and that the HRB's National Intellectual Disability Database (NIDD) is just one of a very small number of data sources in the world that are dedicated to intellectual disability'.

Dr Craig and Professor Roy McConkey, Emeritus Professor of Developmental Disabilities, University of Ulster presented papers on four topics in a dedicated session about information collected from the NIDD.

Beginning with an overview of the National Intellectual Disability Database (NIDD), lessons learned and future plans, Dr Craig provided a background to the data and set the scene for the three following conference presentions.

'Along with the four presentations, Ms Anne Doyle, HRB presented a poster on Multidisciplinary services data from the NIDD. The poster highlighted that multi-disciplinary services are mostly availed of by those living at home, and that demand for services such as speech and language therapy and psychology remains high.

'The NIDD is a rich source of data with the potential to deliver information and insight over and above its primary function. We are always open to explore the possibility to collaborate with others in order to extract the maximum benefit from our data for people with disabilities'.