Trends in treated problem opiate use in the seven health board areas outside the Eastern Regional Health Authority, 1998 to 2002

The total numbers include the 1,495 opiate cases who lived and were treated in the seven health board areas outside the Eastern Regional Health Authority between 1998 and 2002. The incidence of treated problem opiate use increased sharply, from 2.0 in 1998 to 8.3 in 2002, per 100,000 of the 15-64-year-old population. The increase in new problem opiate users at treatment services indicates a spread of heroin use, indicating the need to expand the number and range of treatment services.

The prevalence of treated problem opiate use has also increased steadily, from 6.6 per 100,000 of the 15-64-year-old population in 1998 to 25.4 in 2002, and his is an indicator that problem heroin use have a chronic element requiring continued care or repeated treatment over time. 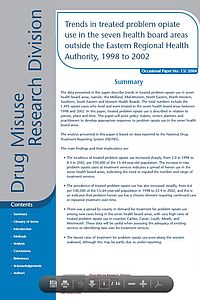