The data presented in this paper describe trends in treated problem opiate use in Ireland between 2002 and 2007. The paper describes treated problem opiate use in relation to person, place and time. The analysis presented is based on data reported to the National Drug Treatment Reporting System (NDTRS). It is important to note that the NDTRS collects data on episodes of treatment in a calendar year, rather than on the individual person treated. This means that individuals may appear in the figures more than once if they receive treatment at more than one centre, or at the same centre more than once per year. The main findings and their implications are: 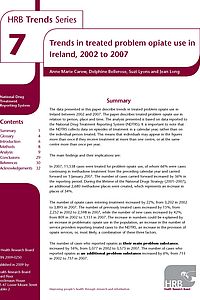