Trends in treated problem drug use in the Health Service Executive Eastern Region, 1998 to 2002

The data presented in this paper describe trends in treated problem drug use among cases living in the Health Services Executive Eastern Region. The analysis in this paper is based on data reported to the National Drug Treatment Reporting System. The main findings are: There were 27,674 cases treated for problem drug use in the region between 1998 and 2002. The total number of cases increased by 23 per cent over the period. 4,871 (18%) were treated for the first time, with a steady decrease in the number and proportion of new cases over the period from 1,140 (22%) in 1998 to 790 (13%) in 2002. Trends in prevalence of treated problem drug use for persons aged between 15 and 64 are provided for the the HSE (Northern) Dublin Area, the HSE South Western Area (of Dublin and all of Kildare) and for the HSE East Coast Area (of Dublin and Wicklow). The incidence of treated drug use increased in three of the 13 local drugs task force areas during the period. Opiates were the most common main problem drug reported by both new and previously treated cases in the region. The proportion of treated cases living in the HSE Eastern Region who report problems with more than one drug increased by 6 per cent, from 69 per cent in 1998 to 75 per cent in 2002. 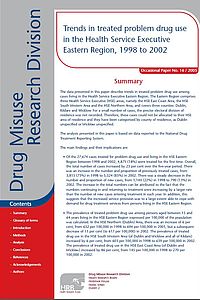