Trends in treated drug misuse in the South Eastern Health Board area, 1996-2000

This occasional paper contains information gathered by the National Drug Treatment Reporting System (NDTRS), an epidemiological database on treated drug misuse complied by the Drug Misuse Research Division (DMRD) of the Health Research Board (HRB). The data shows the number of drug users presenting for treatment in the South Eastern Health Board (SEHB) rose from 150 to 345 in the year 2000. Since 1998 an increasing number of those receiving treatment came from outside the SEHB catchment area (24% of those treated in 2000). This may indicate a preference for the treatment services available in the SEHB area. The socio-demographic data showed that the typical client is male, in his late teens and living in the family home. Cannabis (58% in 2000) was the main problem drug, followed by ecstasy (17% in the same year), followed by opiates (14%). Of the 58 clients who used opiates in the year 2000, 31 of those were IDUs, with 5 of those describing their practice as 'currently sharing', with 32 who had shared injecting equipment at some stage in their life. 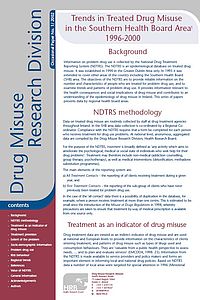