Trends in treated drug misuse in the Republic of Ireland, 1996-2000

This occasional paper contains information gathered by the National Drug Treatment Reporting System (NDTRS), an epidemiological database on treated drug misuse complied by the Drug Misuse Research Division (DMRD) of the Health Research Board (HRB). This paper shows that the number of outpatient treatment centres in Ireland has increased from 35 in 1996 to 104 in 2000, with the number of inpatient services increased from 11 to 18 in the same period. The number of cases presenting for treatment and reported to the NDTRS increased form 4865 in 1996 to 6994 in 2000, which was seen as been due to an increase in drug use, an increase in service provision and an increase in the number of centres providing information. The socio-demographic data showed that the typical client is male, in his early twenties and living in the family home. By 2000 fewer clients were living in the family home, the proportion fell from 69% in 1996 to 61% in 2000. The main drug of misuse was opiates, with 76.3% (5333) of clients reporting opiates as their main problem drug in 2000. Of the 5333 opiate users reporting for treatment, 70% were IDUs, with 3000 reporting having shared drug equipment at some stage in their lives and 476 currently sharing. 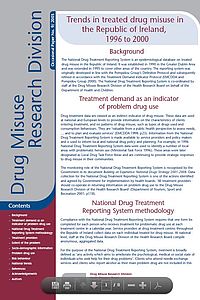