Trends in treated drug misuse in the Midland Health Board area, 1996-2000

This occasional paper contains information gathered by the National Drug Treatment Reporting System (NDTRS), an epidemiological database on treated drug misuse complied by the Drug Misuse Research Division (DMRD) of the Health Research Board (HRB). The data shows that between 1996 and 1999 the number of drug users presenting for treatment within the Midland Health Board (MHB) had more than doubled, from 63 clients in 1996 to 150 clients in 2000. The socio-demographic data showed that the typical client is male, in his early twenties and living in the family home. Clients were slightly older in 2000 than in 1996,with the mean age for all contacts rising from 22 years in 1996 to 24 years old in 2000. Cannabis is the main drug causing problems (67% in 2000), with opiates the drug causing second most problems (38% in the same year). In 2000 the majority (33 of 56 clients) inject their opiates, with over two thirds of IDUs having shared injecting equipment. 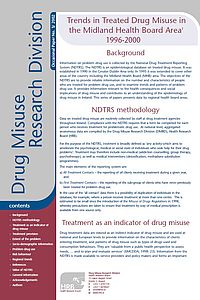