This report presents the findings of a review of the existing evidence on the establishment and regulation of, and governance for, foundation trusts in England and New Zealand. The authors examined a number of countries (Australia, Canada, England, France, New Zealand, Norway, Scotland and Spain) to determine if they had created independent hospital entities from state-owned enterprises. The review shows that England, New Zealand and Scotland had created such entities or commenced a process to create such entities. Scotland is not covered in this review, as the process to establish foundation trusts was the same as in England, but there was not enough documented information to determine why they were dis-established. This report describes: 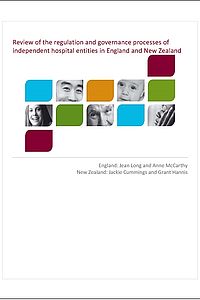