Outputs and outcomes of HRB awards completed in 2014 and 2015

This report presents an analysis of the outputs, outcomes and some emerging impacts across a range of evaluation metrics and indicators, arising from 198 HRB grants (combined value of €55 million) that completed in 2014 and 2015. The analysis presented is a snapshot at the point of end-of-grant (EOG). Further outputs, outcomes and impacts would be expected to occur in the years following the completion of a grant. The data presented in this report relates predominantly to grants that were awarded in the 2010-2013 period, within the remit of the HRB’s Strategic Business Plan 2010-2014. Hence, the data presented can provide a reasonable indication of the impact of the strategic shifts driven by that strategy.

The analysis reported here demonstrates a wide variety of outputs and outcomes produced by HRB-funded research in terms of scientific output, capacity-building outputs, health sector and economic benefits. When compared to previous reporting periods, the data shows that HRB researchers continue to be highly productive, with increases in many metrics. The number of award reporting outputs was found to be very similar to the UK MRC.

The report found that there was an increase in the number of ‘scientific productivity’ markers such as peer-review papers and presentation events at scientific conferences, indicating that HRB researchers in all research areas are increasingly internationally competitive. In particular, the productivity of awards classified as Health Services Research (HSR) has increased from previous reporting periods.

Overall, grants in Population Health Sciences, Health Services Research and Clinical Research produced the most health policy and practice outcomes, healthcare innovations and provided the most research training opportunities for health professionals. Grants in Applied Biomedical Research were the most likely to produce commercialisation outputs of all types. Therefore, in terms of delivering on a key HRB objective of improving people’s health and health care provision, HRB funded research appears to be producing the type of outputs that have the potential to have real impact in this area 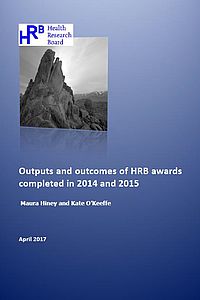