Outputs and outcomes of HRB awards completed in 2012 and 2013

This report presents an analysis of 134 HRB grants (combined spend of €44 million) that completed in 2012 and 2013. It provides an overview of the initial outputs and some outcomes arising from these grants across a range of metrics and indicators. An important proviso in considering this report is that the analysis presented is not a complete picture of the outputs and outcomes from HRB-funded research, but rather a snapshot at the point of end-of-grant (EOG). Further outputs, outcomes and impacts would be expected to occur in the years following the completion of a grant. In addition, it should be noted that the data presented in this report relates to grants that were awarded predominantly in the 2007-2010 period, prior to and just at the beginning of the HRB’s Strategic Business Plan 2010-2014. Hence, the data presented can provide only limited indications of the impact of the strategic shifts driven by that strategy. 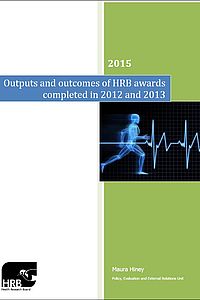