This Statistical Bulletin provides information regarding treated drug misuse in the Republic of Ireland for 1997 and 1998. Drug misuse which occurs outside the treatment context is not included - its extent is unknown. The Statistical Bulletin is based on data collected through the National Drug Treatment Reporting System [NDTRS]. The NDTRS is an epidemiological database providing information on people who present themselves to the health services throughout the country for help with their drug use problems. These problems may involve the misuse of controlled drugs such as cannabis, ecstasy, heroin etc.; or prescribed drugs such as benzodiazepines or antidepressants. Volatile inhalants such as solvents or glue are also included. Data is provided to the NDTRS through centres or service locations where drug use is treated. The locations cover a range of services and facilities including both medical and non-medical care. Returns were received for 68 service locations in 1997 and 100 locations in 1998. Not all possible centres made returns. Amongst the reasons for services not returning data were - no clients presented for treatment or returns were not forthcoming, due, for example, to lack of resources. In conclusion, it is felt that the centres which have returned data for 1997 and 1998, represent reasonable coverage of treated drug misuse in Ireland. 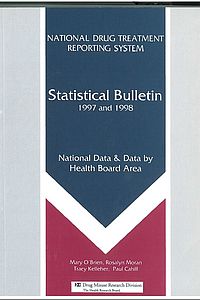