To facilitate the implementation of the HSE Breastfeeding Action Plan, the Department of Health requested the HRB to carry out a review of interventions which aim to increase initiation, exclusivity and duration of breastfeeding. The goal of this review was to identify evidence of effective interventions from good quality systematic reviews to promote and increase breastfeeding rates.

Methods: Databases including PubMed, CINAHL, Embase, MEDLINE, DARE, Trip and Health Evidence databases were searched to identify relevant systematic reviews published between 2005 and 2015. Quality assessment of all reviews was conducted.

Conclusions: While there are apparent gaps in research in relation to some interventions, there is nevertheless a substantial body of consistent evidence that provides a sound basis to proceed with education, counselling and support programmes. These should be of high intensity and continue over the antenatal, intrapartum and extended postnatal period in order to improve rates of breastfeeding among women in Ireland. The existence of structured programmes (such as UNICEF/WHO BFHI) in hospitals, including the above-mentioned education and support, early mother-infant contact, rooming-in and avoidance of supplemental feeds has been shown to be effective. 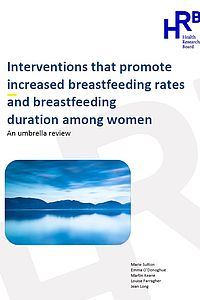