The aim of this evidence review was to identify countries that had implemented new overarching public health legislation for infectious diseases, to identify the legislation they enacted, and to identify lessons learned from national experiences of introducing new legislation.

This evidence review was designed as a systematic review. Fourteen jurisdictions were eligible for inclusion. Overall, 49 legislative instruments were identified across these jurisdictions, including overarching acts and regulations under these acts. In total, 2,090 legislative sections were extracted and mapped to specific categories of legislation agreed with the Department of Health. Additionally, twenty-six studies were identified that reported lessons learned related to the implementation of infectious disease legislation, and a thematic synthesis of these studies was carried out.

We found that public health legislation for infectious diseases focused on measures for disease control and treatment. A variety of implementation strategies were used, despite the unifying element of the WHO international health regulation core capacities, which guided all countries’ new legislation. The lessons learned that we identified, including for example the importance of cross-boundary cooperation, can only be tested in response to major disease outbreaks. The WHO recommends performing preparedness exercises to overcome this limitation. 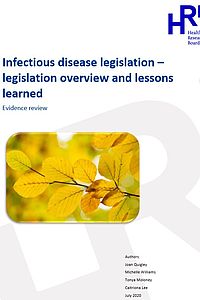