The National Drug Treatment Reporting System (NDTRS) records cases of treated problem drug and alcohol use in Ireland between 2009 and 2015.

• The majority of cases were treated in outpatient facilities (52.7%), similar to previous years.

• Nearly four out of 10 cases were treated in residential facilities, similar to previous years.

• Only 2.7% of cases were treated for problem alcohol use in prison. 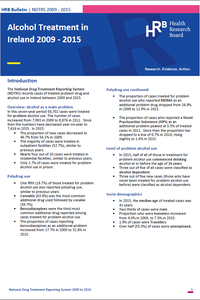