A total of 50,304 cases were treated for problem alcohol use in Ireland between 2015 and 2021, according to the latest figures published by the Health Research Board (HRB). 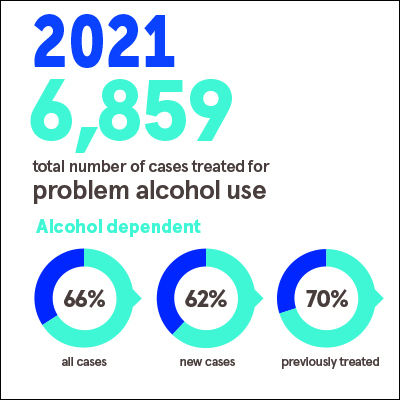 The 2021 report on data from the National Drug Treatment Reporting System (NDTRS) shows a decrease in treated cases from 7,618 in 2015 to 6,859 in 2021, together with a slight drop in the proportion of new cases reported.1

Speaking about the findings, Dr Mairead O’Driscoll, HRB Chief Executive said: “Alcohol remains the main problem drug that people seek treatment for in Ireland. As the timeframe covered by the latest data spans the emergence of the COVID-19 pandemic and related restrictions, the HRB figures are all the more important to monitor the impact that lockdown may have had on problem alcohol use and treatment trends.”

Dr Suzi Lyons, Senior Researcher at the HRB, said: “While we have seen a decline in the number cases reported over the seven-year period, this must be viewed in the context of limited access to services due to COVID-19 restrictions. Even though the numbers have decreased, we are seeing that the trends remain consistent. For example, half of all cases treated started to drink alcohol by the age of 16 and two out of three cases who are new to treatment are already classified as alcohol dependent when they enter treatment. We are also continuing to see cases mixing alcohol with other drugs with almost one in four reporting problem use of other drugs. This is a concern as mixing drugs can impact recovery and increase risk of overdose.”

Commenting on the trends across male and female cases, Dr Suzi Lyons says: “Women seeking treatment for problem alcohol use are consuming a median number of 15 standard drinks4 on a typical drinking day, with spirits and wine being the preferred alcohol. For men, that figure is 20 standard drinks, with beer followed closely by spirits as the alcohol of choice. When we consider that HSE low-risk guidelines5 suggest a weekly limit for alcohol of 11 standard drinks over a week for women and 17 for men, these patterns will clearly have a significant impact on health and well-being.”

This paper describes trends in treated problem alcohol use in Ireland over the seven-year period 2015 to 2021, as recorded by the National Drug Treatment Reporting System (NDTRS). This information will assist policy makers, service planners and public health practitioners to develop appropriate responses to problem alcohol use in the future.

Footnotes:
1)    Each case refers to an episode of treatment, not an individual service user. NDTRS data are case-based which means there is a possibility that individuals appear more than once in the database; for example, where a person receives treatment at more than one centre, or at the same centre more than once in a calendar year.

2)    Alcohol dependence: Strong desire to consume alcohol, impaired control over use, persistent drinking in spite of harmful consequences, a higher priority given to alcohol than any other activities or obligations, increased tolerance and showing withdrawal reaction when alcohol use is discontinued. Source WHO: The Alcohol Use Disorders Identification Test (2001).

3)    Service users currently residing with children refers to the 30 days prior to treatment. This includes children where the service user has a carer or guardianship role; nonrelated children such as foster children and stepchildren; and the children of a long-term cohabiting partner.  Where the service user is a grandparent or other close relative and is the official guardian of a child with whom they are living, they are recorded as living with children.

5)    What is a standard drink? In Ireland a standard drink contains 10 grams of pure alcohol. For example, one standard drink is equal to a half pint of normal beer, a small glass of wine (12.5% in volume) or a pub measure of spirits (35mls): https://www2.hse.ie/wellbeing/alcohol/improve-your-health/weekly-low-risk-alcohol-guidelines.html